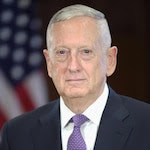 The two men affirmed their commitment to their partnership to defeat the Islamic State of Iraq and Syria, the statement said, and they discussed the latest developments in the Mosul operation and the key role Peshmerga forces have played in the counter-ISIS fight.