The Hague, the Netherlands

The increasing involvement of organised criminal networks in facilitating illegal immigration in recent times called for an enhanced and coordinated response from European law enforcement agencies. Europol was tasked with strengthening its capabilities and launched the European Migrant Smuggling Centre (EMSC) in February 2016. During the first year, the EMSC’s 45 migrant smuggling specialists and analysts comprehensively supported European police and border control authorities in coordinating highly complex cross-border anti-smuggling operations. The centre focuses on geographical criminal hotspots, and on building a better capability across the EU to fight organised people smuggling networks operating in them.

Dimitris Avramopoulos, European Commissioner for Migration, Home Affairs and Citizenship: “Migrant smuggling is a phenomenon that transcends national borders and can only be eradicated through effective partnerships across and beyond the European Union. From the very beginning, the European Migrant Smuggling Centre with Europol has played a central role for the EU and its immediate neighbourhood in successfully fighting, disrupting and apprehending criminal migrant smuggling networks.”

Rob Wainwright, Europol Director: “Over 90% of all migrants that reach the EU have used the facilitation services of a migrant smuggling network. These organised crime networks are taking mass profits from mass migration, and making migrant smuggling the fastest growing criminal sector. To tackle this, we have brought together some of the best investigators in Europe in the EMSC.” The EMSC one year activity report, published today, details how almost 12 000 operational messages were submitted via Europol’s secure communication network SIENA, representing a 34% increase compared to 2015. The operational messages contained data on over 17 400 new suspected migrant smugglers and helped launch 2057 new international investigations. Nearly a quarter of these investigations were related to identity and/or document fraud, as investigators reported detecting 2589 identity documents that had been forged, counterfeit or reported as lost or stolen. In addition, 22 print shops or document forgery factories were identified and dismantled. The EMSC’s ‘list of vessels of interest’ has grown and currently includes information on over 500 vessels that have potentially been used by criminals to smuggle migrants.

An innovative system of case management has allowed the EMSC to closely support 93 highly-complex migrant smuggling investigations, providing tailored products such as 287 analytical reports, 174 migrant smuggling monitoring reports, as well as providing 32 medium-term deployments in hotspots and EU Regional Task Forces. The criminal networks’ use of social media has been a particular focus of the centre’s work. The EMSC was informed of 1150 social media accounts suspected of being used to recruit migrants, compared to 148 such accounts in 2015.

The report, published on the EMSC’s first anniversary, reveals that the basic structure of the organised people smuggling crime networks includes three types of individuals: leaders who strategically coordinate activities along the smuggling routes; organisers who manage activities locally through personal contacts; and opportunistic low-level facilitators.

In the source countries, facilitators openly advertise their services on social media platforms. Here, but also along the migration corridors, they operate out of criminal hotspots and large logistical/transportation hubs, mainly located in large cities but also near border-crossing points and important highways. In a number of cases, crime hotspots were found around reception centres.

Unseaworthy vessels, and decommissioned fishing and leisure boats, seem to have been the primary migration vessels used to reach Europe. Lorries were widely used to cross land borders as part of onward secondary movements, concealing migrants within purpose-built compartments. Facilitated journeys using passenger and cargo trains were also increasingly reported, and directly linked to the rise in checks been carried out on land and sea routes. 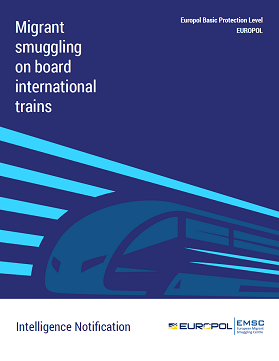