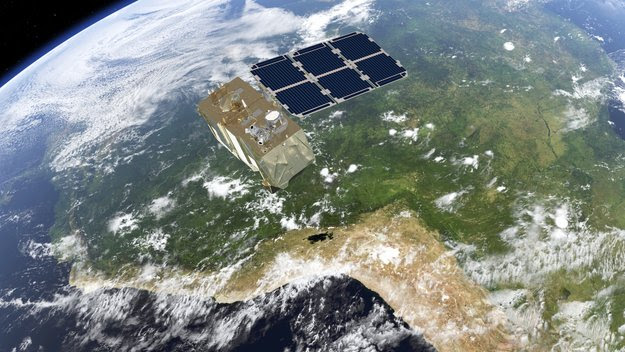 The ESA-developed Sentinel-2B satellite was launched today, doubling the coverage of high-resolution optical imaging in the Copernicus Sentinel-2 mission.Sentinel-2B in orbit

The first stage separated 1 min 55 sec after liftoff, followed by the second stage and fairing at 3 min 39 sec and 3 min 56 sec, respectively, and the third stage at 6 min 32 sec.

After two more ignitions, Vega’s upper stage delivered Sentinel-2B into the targeted Sun-synchronous orbit. The satellite separated from the stage 57 min 57 sec into the flight.

Telemetry links and attitude control were then established by controllers at ESA’s operations centre in Darmstadt, Germany, allowing activation of Sentinel’s systems to begin. The satellite’s solar panel has already been deployed.

After this first ‘launch and early orbit’ phase, which typically lasts three days, controllers will begin checking and calibrating the instruments to commission the satellite. The mission is expected to begin operations in three to four months.

“With this launch we are taking another step toward advancing the Copernicus programme, which is the most sophisticated Earth observation system in the world. And we are planning to add two more satellites to the constellation in the next months: with Sentinel-5P and Sentinel-3B,” said ESA Director General Jan Woerner.

The optical imaging Sentinel-2 mission is based on a constellation of two identical satellites: Sentinel-2A, which was launched in June 2015, and Sentinel-2B. Although launched separately, the satellites are placed in the same orbit, flying 180° apart. Every five days, the satellites jointly cover all land surfaces, large islands, and inland and coastal waters between latitudes 84°S and 84°N, optimising global coverage and data delivery.

Each Sentinel-2 satellite carries an innovative high-resolution multispectral camera with 13 spectral bands for a new perspective of land and vegetation. The combination of high-resolution, novel spectral capabilities, a field of vision covering 290 km and frequent revisit times will provide unprecedented views of Earth.

Information from this mission is helping to improve agricultural practices, monitor the world’s forests, detect pollution in lakes and coastal waters, and contribute to disaster mapping.

“I have personally been involved in Copernicus since its very first day and helped shape it along its way. It is therefore extremely satisfying to see the constellation of satellites delivering data for the services we have always dreamt of,” said Josef Aschbacher, ESA’s Director of Earth Observation Programmes.

“Sentinel-2A gets its twin brother in space with the launch of Sentinel-2B today. This allows global coverage every five days with the 13-channel high-resolution sensor, which is unprecedented in this class of satellites. I look forward to many new applications coming from Sentinel-2 now that this constellation is complete.”

Six families of Sentinel satellites will make up the core of EU’s Copernicus environmental monitoring network. An EU flagship space initiative, Copernicus provides operational information on the world’s land surfaces, oceans and atmosphere to support environmental and security policymaking, and meet the needs of citizens and service providers.