This joint advisory is the result of analytic efforts among the Cybersecurity and Infrastructure Security Agency (CISA), the Department of the Treasury (Treasury), the Federal Bureau of Investigation (FBI) and U.S. Cyber Command (USCYBERCOM). Working with U.S. government partners, CISA, Treasury, FBI, and USCYBERCOM identified malware and indicators of compromise (IOCs) used by the North Korean government in an automated teller machine (ATM) cash-out scheme—referred to by the U.S. Government as “FASTCash 2.0: North Korea’s BeagleBoyz Robbing Banks.”

Click here for a PDF version of this report.

!!!WARNING!!!
Since February 2020, North Korea has resumed targeting banks in multiple countries to initiate fraudulent international money transfers and ATM cash outs. The recent resurgence follows a lull in bank targeting since late 2019. This advisory provides an overview of North Korea’s extensive, global cyber-enabled bank robbery scheme, a short profile of the group responsible for this activity, in-depth technical analysis, and detection and mitigation recommendations to counter this ongoing threat to the Financial Services sector.
!!!WARNING!!!

North Korea’s intelligence apparatus controls a hacking team dedicated to robbing banks through remote internet access. To differentiate methods from other North Korean malicious cyber activity, the U.S. Government refers to this team as BeagleBoyz, who represent a subset of HIDDEN COBRA activity. The BeagleBoyz overlap to varying degrees with groups tracked by the cybersecurity industry as Lazarus, Advanced Persistent Threat 38 (APT38), Bluenoroff, and Stardust Chollima and are responsible for the FASTCash ATM cash outs reported in October 2018, fraudulent abuse of compromised bank-operated SWIFT system endpoints since at least 2015, and lucrative cryptocurrency thefts. This illicit behavior has been identified by the United Nations (UN) DPRK Panel of Experts as evasion of UN Security Council resolutions, as it generates substantial revenue for North Korea. North Korea can use these funds for its UN-prohibited nuclear weapons and ballistic missile programs. Additionally, this activity poses significant operational risk to the Financial Services sector and erodes the integrity of the financial system.

The BeagleBoyz’s bank robberies pose severe operational risk for individual firms beyond reputational harm and financial loss from theft and recovery costs. The BeagleBoyz have attempted to steal nearly $2 billion since at least 2015, according to public estimates. Equally concerning, these malicious actors have manipulated and, at times, rendered inoperable, critical computer systems at banks and other financial institutions.

North Korea’s widespread international bank robbery scheme that exploits critical banking systems may erode confidence in those systems and presents risks to financial institutions across the world. Any BeagleBoyz robbery directed at one bank implicates many other financial services firms in both the theft and the flow of illicit funds back to North Korea. BeagleBoyz activity fits a known North Korean pattern of abusing the international financial system for profit.

The BeagleBoyz, an element of the North Korean government’s Reconnaissance General Bureau, have likely been active since at least 2014. As opposed to typical cybercrime, the group likely conducts well-planned, disciplined, and methodical cyber operations more akin to careful espionage activities. Their malicious cyber operations have netted hundreds of millions of U.S. dollars and are likely a major source of funding for the North Korean regime. The group has always used a calculated approach, which allows them to sharpen their tactics, techniques, and procedures while evading detection. Over time, their operations have become increasingly complex and destructive. The tools and implants employed by this group are consistently complex and demonstrate a strong focus on effectiveness and operational security. Anatomy of a BeagleBoyz Bank Heist

Figure 2 provides a graphical depiction of a BeagleBoyz bank heist. The next section describes in detail the end-to-end actions the BeagleBoyz take to rob financial institutions with a malicious cyber operation. 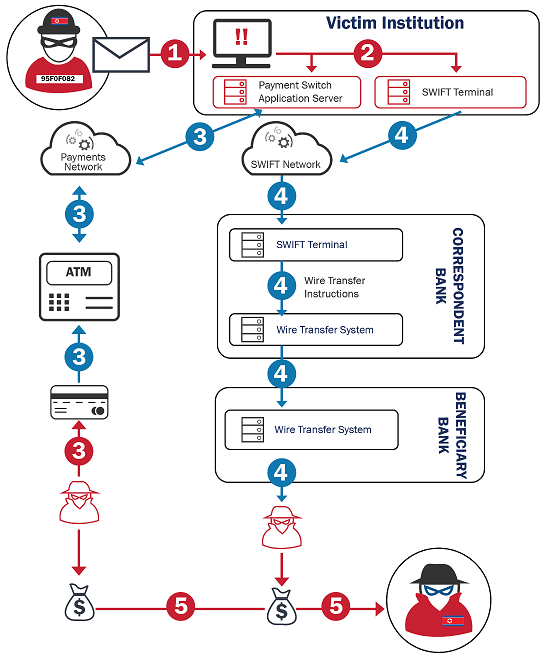 The BeagleBoyz use a variety of tools and techniques to gain access to a financial institution’s network, learn the topology to discover key systems, and monetize their access. The technical analysis below represents an amalgamation of multiple known incidents, rather than details of a single operation. These findings are presented to highlight the group’s ability to tailor their techniques to different targets and to adapt their methods over time. Consequently, there is a need for layered mitigations to effectively defend against this activity, as relying solely on network signature detection will not sufficiently protect against North Korea’s BeagleBoyz.

The BeagleBoyz have used a variety of techniques, such as spearphishing and watering holes, to enable initial access into targeted financial institutions. Towards the end of 2018 through 2019 and in early 2020, the BeagleBoyz demonstrated the use of social engineering tactics by carrying out job-application themed phishing attacks using the following publicly available malicious files.

The BeagleBoyz may also be working with or contracting out to criminal hacking groups, like TA505, for initial access development. The third party typically uses commodity malware to establish initial access on a victim’s network and then turns over the access to the BeagleBoyz for follow-on exploitation, which may not occur until months later.

The BeagleBoyz have also used the following techniques to gain an initial foothold on a targeted computer network (Initial Access [TA0001]).

The BeagleBoyz selectively exploit victim computer systems after initially compromising a computer connected to a financial institution’s corporate network. After gaining initial access to a financial institution’s corporate network, the BeagleBoyz are selective in which victim systems they further exploit. The BeagleBoyz use a variety of techniques to run their code on local and remote victim systems [Execution [TA0002]).

The BeagleBoyz use many techniques to maintain access on compromised networks through system restarts, changed credentials, and other interruptions that could affect their access (Persistence [TA0003]).

The BeagleBoyz often seek access to financial institutions’ systems that have tiered user and system accounts with customized privileges. The BeagleBoyz must overcome these restrictions to access necessary systems, monitor normal user behavior, and install and execute additional malicious tools. To do so, the BeagleBoyz have used the following techniques to gain higher-level permissions on a system or network (Privilege Escalation [TA0004]).

Throughout their exploitation of a financial institution’s computer network, the BeagleBoyz have used different techniques to avoid detection by OS security features, system and network security software, and system audits (Defense Evasion [TA0005]).

The BeagleBoyz may use malware like ECCENTRICBANDWAGON to log key strokes and take screen captures. The U.S. Government has identified some ECCENTRICBANDWAGON samples that have the ability to RC4 encrypt logged data, but the tool has no network functionality. The implant uses specific formatting for logged data and saves the file locally; another tool obtains the logged data. The implant also contains no mechanism for persistence or self-loading and expects a specific configuration file to be present on the system. A full technical report for ECCENTRICBANDWAGON is available at https://us-cert.cisa.gov/northkorea.

The BeagleBoyz may not always need to use custom keyloggers like ECCENTRICBANDWAGON or other tools to obtain credentials from a compromised system. Depending on the victim’s environment, the BeagleBoyz have used the following techniques to steal credentials (Credential Access [TA0006]).

Once inside a financial institution’s network, the BeagleBoyz appear to seek two specific systems—the SWIFT terminal and the server hosting the institution’s payment switch application. As they progress through a network, they learn about the systems they have accessed in order to map the network and gain access to the two goal systems. To do so, the BeagleBoyz have used the following techniques to gain knowledge about the systems and internal network (Discovery [TA0007]).

To access a compromised financial institution’s SWIFT terminal and the server hosting the institution’s payment switch application, the BeagleBoyz leverage harvested credentials and take advantage of the accessibility of these critical systems from other systems in the institution’s corporate network. Specifically, the BeagleBoyz have been known to create firewall exemptions on specific ports, including ports 443, 6443, 8443, and 9443. Depending on the conf